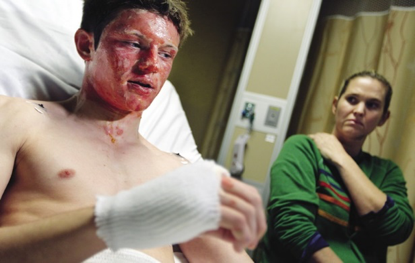 Despite communication efforts and safety alerts sent out by the American Chemical Society, the US Chemical Safety Board, National Fire Protection Association, and National Science Teachers Association, tragic and preventable incidents are occurring during science demonstrations involving flammable materials.  Most recently, another incident “Four students injured in science experiment gone wrong at Bronx school” occurred on November 22, 2017 at an high school academy in New York City.

Since 2006, over 90 children have been burned in these incidents, some as young as 3 yrs old. For links to articles and dates of these incidents are available upon request.

Why Does This Keep Happening?

In many of the cases where injuries have occurred, the demonstrator has tried to sustain the flame by adding additional fuel to a hot evaporating dish or a dish where the methanol flame has not gone out, but is not visible. When a 1- or 4- liter container is used by the demonstrator, a phenomenon known as “flame-jetting” can occur.  A NFPA Sep/Oct 2017 article explains flame jetting with images from the Bureau of Alcohol, Tobacco, Firearms and Explosives (ATF) testing at the Fire Research Lab (FRL).

Flame jetting is most likely to happen when: 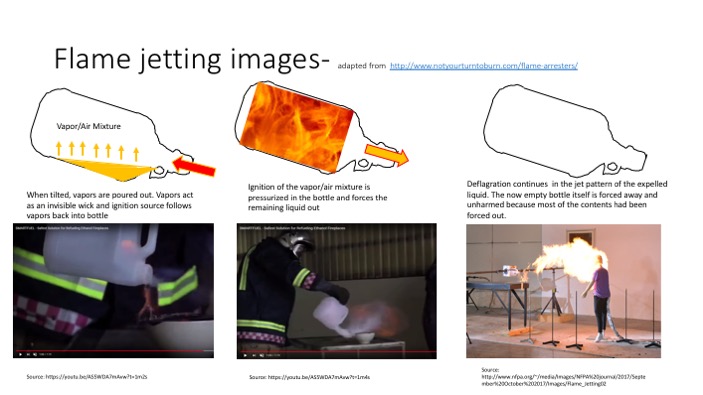 What Can Be Done?

Flame arresters have been shown in testing to prevent flame jetting from portable flammable liquid containers that would otherwise produce jets in certain conditions.

The organization Not your turn to burn, which has been organized by mothers of burn victims, has extensive information about the mechanisms behind flame jetting and advocates for flame arresters in The Portable Fuel Container Safety Act of 2017, currently in committee, would require flame arresters on portable flammable liquid containers. Fire prevention advocates say that adding a flame arrester to the opening of a container costs when the container is manufactured will cost less than 50 cents on most portable fuel containers.

This phenomenon is not unknown to the ethanol industry and some manufacturers routinely install flash arresters such the grates on alcoholic beverages such as this Bacardi 151, as manufacturers are aware of flaming drinks. 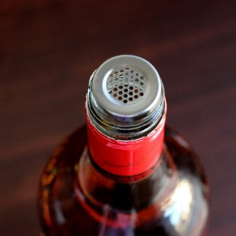 Flame arresters are required by OSHA for workplace use but not by Consumer Product Safety Commission (CPSC); many feel that making a packaging option on bottles of common alcohols similar to those on alcoholic beverages could prevent more household tragedies.

Template for writing local school officials on this issue

Dear Dr. Superintendent:
As a parent of a current student/ scientist/ concerned community member/ member of the American Chemical Society’s (ACS) Division of Chemical Health and Safety- I’m writing to you today to ensure that you were aware of recent accidents involving unsafe scientific demonstrations and that your district has policies in place for ensuring the safety of scientific demonstrations in your schools. In addition, I would like to make you aware of information that ACS produced specifically related to the safe handling of chemicals for educational purposes.
The driving force behind my correspondence today was the recent report of several students being injured during a “chemistry experiment gone wrong”. Details on this specific event are still slim, but unfortunately seem to be consistent with several recent events in which students have been injured during demonstrations involving flammable materials. One such experiment, the ‘rainbow demonstration’ has been the cause of numerous accidents resulting in severe student and teacher injuries. In spite of many news reports and multi-million-dollar settlements- these accidents continue to happen.
So we are reaching out directly to our local school districts and teachers to try to spread the word regarding the dangers of these types of experiments and safer alternatives. The ACS, National Fire Protection Agency, and the US Chemical Safety Board have all created documents highlighting these dangers and guidelines for providing safe and educational demonstration. I’ve included several links to these (free) resources below and would be glad to discuss this more with you if desired.
Sincerely,
Your Name,
Address and Phone